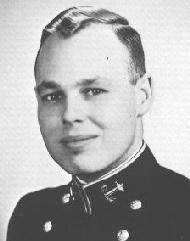 Fishing, hunting, jazz, women, and wine, not necessarily in that order, but as the year passes one of these is always at the head of Frank's current preferences. He is not a fellow to be found wasting time; he always has something in the fire. An asset to any group, Frank's easy going nature and subtle humor have made many lasting friends for him here. Music has not always been just a pastime for Frank. He was an accomplished jazz drummer before entering the Naval Academy, and has played with several groups during his four year stay. We will hear more of Frank in the years to come. 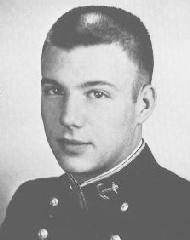 Although just out of high school, Bob came very capably equipped for academy life to both gain and impart a great deal of knowledge while preparing for his role in our future. Bob's free time, meaning most of the time, was shared by the business end of an oscilloscope up in the Radio Club, the pursuance of any number of battalion and company sports ranging from football to badminton, and dragging his very winsome OAO. However, his special talent was electrical engineering, and he flirted with the Superintendent's List throughout his stay. Many were the times he readily explained to his classmates their skinny courses. A multitude of interests in many fields and a command of each assures the Navy's answer to Steve Canyon an outstanding future in any technical position. 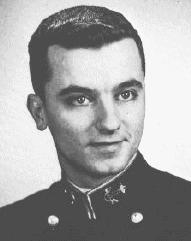 Sports cars and girls were the primary interests of the little Greek from upstate New York. Nick, his pleasant smile, and his little red sports car were a familiar sight to twenty-fourth company firsties, and his overly decorated bathrobe was a familiar sight within the confines of Bancroft Hall. A sports star in high school, Nick broad jumped on the plebe track team and then participated in battalion track and football and company cross country the rest of his time at Navy. When not busy escorting a member of the fair sex, Nick was usually occupied with sports cars or athletics. Nick's pride and joy since plebe year has been his little MG. Following graduation, Nick plans to drive his MG to Pensacola, where a career in Navy Air awaits him.