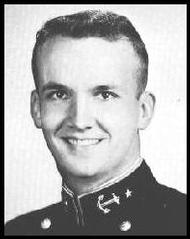 Nick, a Californian from the word "go," hails from Long Beach in the booming southern part of the Golden State. Constantly standing by his ideals he has won innumerable friends. Consistently at the top of his class academically, he also found time to enthusiastically give much of his time helping others and take part in varied extra-curricular activities. He was never one who advocated physical over-exertion as attested by his love of the rack. However, he spent many long afternoons with the rifle team. With a sincere appreciation of his profession, he looks with great anticipation to a successful career in Navy Line. 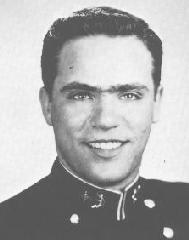 John blew into the Naval Academy from the Windy City, found it to his liking, and decided to stay. It was a gain both for him and Navy. Academics never presented a problem to John. His application and concentration enabled him to stand in the top quarter of his class. And yet he was no bookworm either-his tall good looks and charming personality made him a favorite with the fair sex. John, too, was quick to demonstrate his athletic ability with capable performances on the plebe and varsity swimming teams, and for relaxation he lent his fine tenor voice to the Antiphonal Choir each Sunday. In John, we feel all hands will discover a fine officer and a credit to the Service. 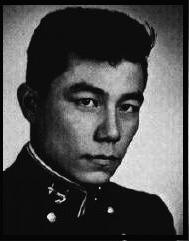 Pete would gladly take one breath of the California smog and trade it for the humidified eastern atmosphere. Coming from Los Angeles, he joined the movement which saw a few odd hundred Californians join the class of '63. Subject to the whims of a mind with varied interests, Pete would even take an engineering overload if he found time to put down his cards, fishing rod, and other diversions. Twice a year Pete would settle down and join his classmates and prep for the oncoming rush of exams. He could "gouge" his classmates more than himself and never had any serious academic troubles. Pete is a good boxer and was a standout in plebe football until an untimely shoulder injury occurred. Enjoying all sports, he has lent a hand to many company teams. In the future, Pete's diversified interests and abilities may just find him in Naval Aviation.