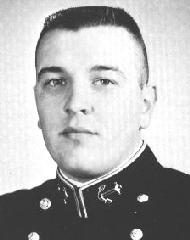 Jim comes from San Mateo, California, located on the San Francisco Peninsula. He attended Serra High School and the College of San Mateo before coming to Annapolis. As an all-Northern California quarterback, Jim brought to USNA fantastically high ratings and helped spark the Plebes to a very successful season. During youngster year, Jim played on the varsity, but an injury during spring practice hampered him. Consequently, he decided to turn his aggressiveness to battling the books. Being an avid Californian, Jim spent most of his summer leaves at Lake Tahoe or hopping to Hawaii. His "black book" was noted throughout the Brigade, and he always seemed to have the prettiest girl everywhere he went. Jim, a Bull major, never had much trouble with the E. H. and G. Department, and next to the Navy, his chief interest lies in politics. With his fine attitude and never-ending zeal, Jim should make a fine line officer. 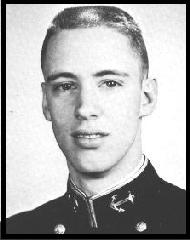 Since his arrival from Arlington, Virginia, Rich has been the key man of many Navy crews. As the plebe heavyweight crew coxswain, he urged and led his shell to an undefeated season and a fourth place in the Olympic elimination finals. Third class year found Rich on the National Sprint Championship Crew. He has been top cox of the heavies ever since. Between crew seasons, "Omo" could be found on the company lightweight football team. Though certain of the academic departments seemed to slow him down at times, Rich always came through with flying colors, managing to stand with the first of his class in foreign languages and in English. Rich's wonderful sense of humor and always cheerful, sincere manner will make him as successful in the fleet as he has been at the Naval Academy.

Dick came to U.S.N.A. after attending Grosse Pointe High School. Although he had difficulties with his academics, Dick always managed to pull them out. His extra-curricular activities included reading his girl's letters and starring in company basketball. Weekends he could be found dragging, as he had a weakness for the fair sex. He also had a weakness for Rock & Roll, much to the anguish of his roommates. Dick plans to make a career of the Navy. Wherever he goes, his agreeable nature will make him a success.