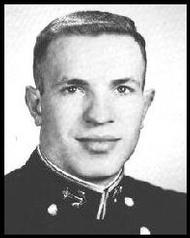 Jim, Charlottesvile's contribution to Annapolis, chose the Academy life over the fraternity life of the University of Virginia. Before coming to USNA, he attended Servern School, where he distinguished himself as the school's finest athlete. He continued to remain active in sports including 150 pound football, lacrosse, and boxing. The weekend before a Monday P-Work, Jim could usually be seen dragging some sweet young thing through the yard. During the week, he spent most of his free time in the horizontal position smoking someone else's cigarettes. Second class summer at TRAMID convinced him to seek a career in the Marine Corps. Jim will be a credit to the service, as well as a fine representative of the Academy. 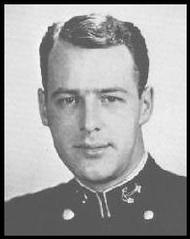 One of the oldest members of our class, Dave hails from Lincoln, Rhode Island. Upon graduating from high school he spent three years at Phillips Exeter Academy, Yale, and the Naval Academy Prep School, respectively, before settling down on the banks of the Severn. All of this previous schooling, aided him no end in his first two years at Navy, during which time his name graced the Superintendent's List. But it was not all study for Dave, in that many an hour was spent on the river with the Plebe and varsity Crew while Plebe swimming and company cross crountry and field ball rounded out his time in the athletic field during the off season. Working towards a Foreign Languages major, Dave carried overload courses in German and Russian, suppplementing his class room work with active participation in these language clubs. Not to be contained with personal interest only, he also dedicated two years' work as <I>Lucky Bag</I> representative. Dave is looking forward to joining the ranks of Naval Aviation on graduation. 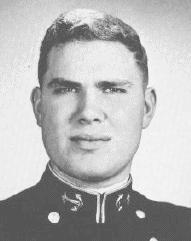 Born and raised in the "Big City," Jimmy came to the Academy straight from high school. Throughout his life Jim's main goal has been to become a career Naval Officer. Working toward this end, he spent a half year in the Naval Reserve as well as closing out his high school days with an excellent academic record. "Jace"-derived from J.C.- has a keen sense of humor and an extraordinary wit, which he combines to create a personality well known to all his friends. While holding down good grades in all subjects, "Jace" is tops in the Foreign Language field. By means of the elective system Jim is shooting for a major in Spanish. Not one to be unaware of physical fitness, Jace has excelled in intramural crew while here at the Academy. Upon graduation the Navy will be getting a fine "Thirty year man" in "Jace."