Bud came to the Academy from what he calls "the hub of the Nation", Boston. His main hobby has been sports, and he has acquired a fine reputation playing football, fieldball, and softball. Studies have been one of his better endeavors, being consistently on the Superintendent's List. He is a very likeable person bearing a resemblance to a koala bear. This could be the reason the girls flock around him. Bud is also a home body, traveling to Boston whenever he was able to get a weekend. Graduation will provide the service with a fine officer who will be ready to do his job well. 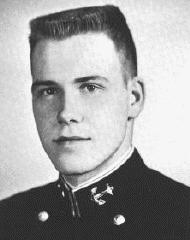 With guitar in hand and that ever present smile, Neil traveled Annapolis way from Arlington, Virginia. An old hand at crew, he was forced to trade oar for slide rule after a few rounds with the "skinny" department. Neil has devoted much time and energy to the musical activities at the Academy. A member of both choir and glee club, he found time to play the organ for the chapel at the academy hospital on Sunday mornings. Aside from his time with the studies and extracurricular activities. he found dating an ever possible and pleasant pastime on those spare weekends from the books. The plans of the future hold Navy Air for this jovial Southerner "throttling the fastest with the mostest." With his practice of combining diligent work with his ever pleasing personality, Neil will achieve all his future goals and be a credit to the fleet in every way. 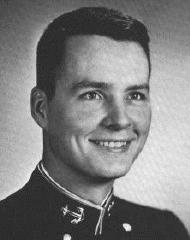 John came to USNA from the small Maine town of Rumford after one year at the University of Maine. During Plebe year he became famous as the only Plebe in the company who never rose before reveille. Youngster year it's hard to say if John spent more time sleeping or studying. He did very well in academics though, with very little "extra studying." In general, he seemed to grasp the studies with ease all four years. John was a real home lover, and it was not unusual to see him heading for Rumford for a weekend first and second class year. He was an excellent intramural soccer and fieldball player and helped his company to many victories. Upon graduation John plans to go Navy line and hopes to get a ship based "as close to Maine as possible." Whatever John decides to do, he will always be noted for doing a competent and complete job and will definitely be an asset to the fleet.