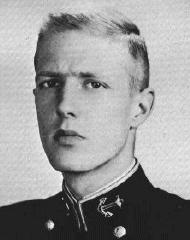 Pete has lived around quite a few Naval bases in his time but calls Newport, R.I., his home. An excellent pitcher and tennis player in high school, his first year and USNA found Pete sparking the Plebe squash team. Beginning with youngster year, his time was occupied with his Bull and Math overloads, and soon after Pete's "one and only" joined him in Annapolis to share his weekends. Always plunging wholeheartedly into everything with which he was associated, Pete was a man of stout convictions. With an ever ready smile, a quick reply, and a good natured laugh, Pete is a loyal and true friend. His drive, determination and friendly manner should serve him well in his chosen branch of the Navy. 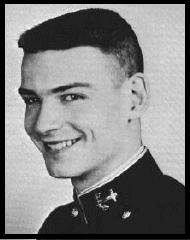 Mike reported to the Naval Academy directly from high school and indirectly from Saudi Arabia, which he called home until his parents returned to the United States in 1961. Academics were not Mike's outstanding accomplishment while he was here, perhaps because of his outstanding effort to carry out the people to people policy with several females in various parts of the country and the world. He always tried to have female contacts in any city he thought he might go to in the future, and who knows where one might go with the "Modern Navy." His extracurricular activities were limited to WRNV, several company sports, and extra instruction. He was not afraid to learn by asking for help, nor was he unwilling to share his time if he could be of assistance. Though Mike was not the star attraction on any field, his efforts in the hall or on the field were always aimed at making the Brigade a better one. 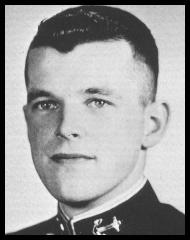 Joe joined us after a year of pre-med at LaSalle College in Philadelphia. His athletic ability was quickly recognized when he made the plebe basketball team. When not making points on the basketball court, he was scoring in academic departments, frequently appearing on the Superintendent's List. He had leanings toward the Foreign Languages Department, where he took elective courses in Spanish. It was not a rare sight for Joe to be seen poring over the daily racing results. His love of the Sport of Kings was matched only by his love of the queens whom he dragged regularly. His election to the Brigade Honor Committee attests to the trust placed in Joe by his classmates and to his sense of responsibility. The Naval Service will be enriched by the addition of this fine officer to its ranks.