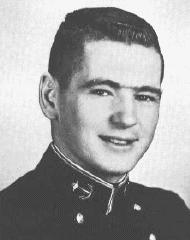 Mark came to the Naval Academy after spending two years at Catholic University in Washington, D. C. This experience has enabled him to breeze right through his academics. And if anyone wanted the "gouge", he always came to see Sweeney. The battalion lacrosse, crew, and wrestling teams as well as the company soccer and fieldball teams have all been fortunate to have this aggressive athlete leading the competition. Mark has many famous trademarks which have endeared him to all, save the executive department. His patented "Heh, heh!" was the typical reaction to any of his many daily crises. His no-sweat attitude made plebe year an enjoyable experience for this rare midshipman who was lucky enough to live within the seven mile limit. And who but Mark could get through two years without owning any full-dress trousers. This affable graduate has proven his ability to weather any storm and will continue to be a real asset to the Navy. 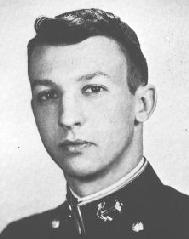 "Tomato", as Tom has been dubbed by his classmates, hails from Frankfort, Kentucky. He was an outstanding member of his high school class, and he carried his qualities of dependability, friendliness, and a keen sense of humor with him to the Academy. Since he is a typical midshipman, his pet peeves are science labs, quizzes, and exam week. His favorite hobby is history, and he has come to be known by his classmates as an authority on World War II. Tom is a member of the honorary organization known as the Kentucky Colonels, one of the most elite groups of the South. He was made a member by the governor of Kentucky, not only for his civic leadership in high school, but also because he holds the distinction of being the first person from Frankfort to be appointed to the Naval Academy. Upon graduation, Tom wants to go into Navy Line, preferably cruisers. 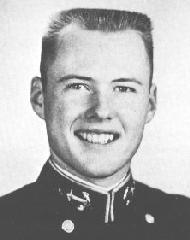 Wade came directly to the Academy after attending Boulder City High School in Boulder City, Nevada. While at the Academy his interests were varied. He was a member of the Ocean Sailing Squadron, the Protestant Chapel Choir, the Concert Band, the Advanced Science and Mathematics Seminar, and WRNV. In addition, he played company 150 pound football and found time to take elective courses in the sciences. With most of his time taken up with activities, it was a wonder that he was also able to obtain the privilege of wearing stars. His cheerful manner and his ease to see the lighter side of things made him a true friend of many. However, he was also respected for his serious attention to his work and for his ability to get a job done when the chips were down. It is because of these characteristics that he will be a credit to the Navy and to his country in future years.