A tall, lanky, likeable redhead, Skip is a real pleasure to be around. His friendly disposition and keen sense of loyalty to his classmates have made him one of the most popular persons in the Brigade. As equally at home on the basketball, volleyball, or squash court as he is at Spanish and after dinner speaking, Skip has entered into many phases of Academy life. Known to all his friends is his great love of Naval Aviation, with his private goal in life being to fly with the "Blue Angels". Coupled with this enthusiasm for Navy Air is Skip's devotion to the Naval Service as a whole. His only headache comes from people who profess a preference to subs over jets. Skip has indeed been a credit to the Brigade and will continue to be a credit to the Navy, when he becomes Ensign Templin, USN. 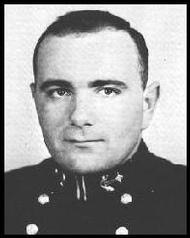 Coming from Watertown, Massachusetts, Ron spent a year after high school at Bullis Prep. Playing football at Bullis saw Ron anchor the line that held '62 plebes to a 6-6 tie. Since then, to the relief of Navy coaches, Ron joined the Brigade and has been a regular tackle since plebe year. Despite his size, "The Bear" has been one of the agilest, fastest, men on the team. Ron is well known for his carefree yet serious attitude towards every task he undertakes from studying to eating. His tremendous appetite comes from his mother's fine Italian specialties. Many have wondered where Ron puts it all. Ron enjoyed second class summer and in 1963 Naval Air may just very well find an easy going, smiling student down in Pensacola. 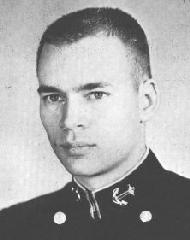 Coming to the Naval Academy from Avella High School via Bullis Prep, Tom was well prepared for Naval Academy life before entering. An ardent sport's fan, he follows the sports page as much as he does his textbooks. Maybe his keen interest in sports accounted for his trouble with the academic departments. A fine athlete himself, he enjoyed playing company football and softball and battalion handball. Tom was always in love. When it wasn't with a girl, it was with a new game or a new team. This may account for the fact that he was never at a loss for "drags." Tom's good sense of humor, his quick wit, and his ability to make friends and keep them will help him make a huge success in whatever field he chooses. His friends at the Naval Academy are innumerable, and he will always be remembered by them,