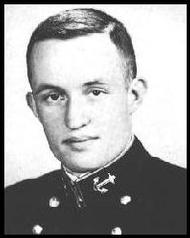 Pete came to the Naval Academy after a year at Michigan State University. He has been a recipient of numerous left handed salutes and multitudes of pennies, not only because of his striking resemblance to the "God of 2.5," but because of his often given aid to struggling classmates. Though "Verm" has maintained an outstanding academic average, standing in the top of his class, he has still found time to excel in athletics, earning his "N-star" for varsity swimming during his youngster year, and also taking an active part in the LOG and N-Club activities. With his hard working and conscientious outlook on life, Pete's demonstrated abilities in academics and leadership can only lead to a great future for him, whatever his endeavors. 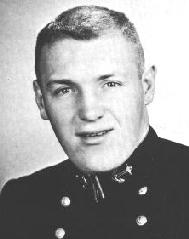 Coming to the Academy through the Naval Reserve Quota, Vern attended Columbian Prep in Washington, D. C., before settling down on Severn's shores. A graduate of Pennsbury High School, he played football, and also wrestled there. Vern kept up his athletic interests here at the Academy, playing varsity football for three years and lacrosse plebe year. After doing a fine job as class president youngster year, his classmates reelected him during second class year. He enjoys fishing and wants to see Japan before he settles down to family life. 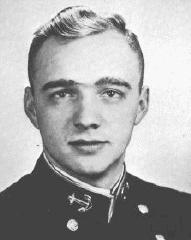 From July 7, 1959, on, anyone could tell by that certain "laugh" that "Wap" was somewhere near in the halls of Bancroft. Bob, the son of a bandleader, hails from Anytown, U.S.A., but he settled down long enough to receive a competitive appointment to USNA through Georgia Military Academy. In sports Bob participated in swimming and sailed with the Ocean Sailing Squadron. Intellectually, he was a member of the Foreign Relations and Spanish Clubs. The fields of history and geography claim Bob's major interest in academics. His spirited drive, vivid sense of humor, and ability to take knocks on the chin will make Bob a particular asset to the Navy as a commissioned officer.