Mike arrived with a California tan, a love for the outdoors, and an ever ready sense of humor, all of which only matured during his four years on the Severn. Seldom flustered by everyday problems or academics, Mike was always ready to lighten someone else's mood with an amusing quip. Mike's great love, mountain climbing, was never forgotten. Plans were always being made for the next climb. Besides enjoying a variety of sports he developed a devastating game of tennis, which he could always depend on to score with the fair sex. Mike's interests range far outside the basic curriculum into literature, poetry, art, philosophy, and psychology. His horizons are as unlimited as the mountains he climbs, he will always be an asset to those he serves. Tall and fair, "Wink" is Georgia's gift to the class of '63. He came to USNA via Marion Military Institute in Alabama, so adapting to the military way of life was no problem. Athletically, "Wink" rows crew and is an avid Navy football fan. Not much for waking up right away in the morning, only the comics and a few cigarettes acted as a buffer zone between reveille and breakfast. Quiet by nature, the "Winker" spent most of his free time either sleeping or reading. At neither occupation can he be beaten. It's been estimated that he has read every best selling novel in the past five years. Girls are, of course, a favorite avocation. Only a need of rest keeps him from dragging every weekend. "Winker" is sure to be a success no matter what branch of the service he chooses. 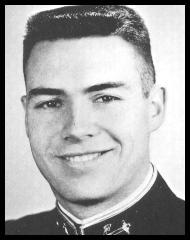 Wearing a friendly smile and filled with enthusiasm, Rich waved goodby to his beloved Nevada, and came to USNA for a four year cruise. Rich soon found his second home in Hubbard Hall where he spent most of his afternoons rowing on the Severn. His ability to apply himself and his desire to learn resulted in academic success. Even so, Rich was never satisfied with his achievements and was constantly striving to do better. His smooth manner and likeable ways helped him to make friends far and wide. This, mixed with his ambitious and "never say die" spirit, can only lead to a successful service career.