Carry On
USNA Class of 1963
The most beautiful phrase in the English language?  Perhaps that is a temporal question:  At one time in your life it was "I love you" - another time, "All You Can Eat."  (For some of us, those two may have occurred in the same era.)

Today it may be something more prosaic like "The mortgage is paid."  But for a thousand young men in the summer of 1959, there was no question   -   absolutely nothing sounded so good as ....
"Carry on, Mister!"

Among other conversations at the 35th Reunion were a couple involving Plebe Year and the ingestion of Cannon Balls for dessert.  A number of the guys recalled this gustatory delicacy with fondness so I told them I have a recipe which, I think, came from Shipmate some years ago.   So, here is the recipe for everyone.
U.S. Naval Academy CannonBalls (The Edible Kind)

Roll out a one (1) ounce piece of pie dough into a circle approximately six
(6) inches in diameter.  Place a cored, peeled apple in the center of the
pie dough.  Fill the center of the apple with cinnamon-sugar mix.  Fold the
pie dough around the apple and place the conglomeration onto a greased
(non-stick) cookie sheet pan.  Bake the apples at 400 degrees Fahrenheit
for approximately twenty-five (25) minutes or until the apples are soft.  Be
careful you don't burn the pie crust.

Hard Sauce:  Place the granular sugar and butter into a mixing bowl and
beat them until they are thoroughly mixed.  Add either Vanilla or Rum
flavoring (to Taste, as the Flavor Gods demand) to the sugar-butter mix and
stir it in.  I recommend the Rum Flavor - no cracks from guys with long
memories of Cruises and O'Clubs!

When the apples are baked, place a good, healthy dollop of Hard Sauce on
top of the apple-in-crust. Then, eat the whole thing remembering fondly
those few times you were allowed to eat Cannon Balls while in the blissful
state of "Carry-On".

Easy Hard Sauce:  While it's quite possible to make Hard Sauce with granulated sugar as specified, it's a lot quicker and easier to use confectioners (powdered) sugar.   It's more a culinary than a gustatory matter, but it's so.

Hard sauce is simply flavored thick texture cake frosting.  Confirm with the ladies that 'from scratch' icing is made a lot easier with confectioners than granulated sugar.  It makes smoother stuff regardless of beating and takes a lot less beating effort to dissolve in the butter.

Certificate of authenticity:   The preceeding recipe has been served aboard USS John Marshall (SSBN-611) on the 38th submerged day of the last patrol before overhaul inside the Arctic Circle at 105 feet and five knots (standard patrol depth and speed for a prompt stop, hover, and launch).

Mr. B
One of the legends of our time at Annapolis was Mr. B - that mysterious voice that resounded over the mess hall PA system with an entirely irreverent and unauthorized review of the morning's menu.  Mr. B had a long and storied career - as it turns out, he was a member of your Class of '63, and never captured by the administration - although there were some close calls.  It's a fascinating story, and even involves Uncle Charlie as a co- conspirator.  Read it all here, complete with some audio sound effects.
&nbs p; Introduction to Mr. B
&nbs p; Mr. B Audio Effects
Illustrat ed History of Mr. B

Bud Alexander, Class of '56, wrote this article for Shipmate on his research involving the "Men of Annapolis" TV series televised back in 1957 - 58.   Bud compiled quite a bit of information about the evolution of the series, the stories involved, and the reaction of the alumni from the classes of '62 - '68.  He requested members of the classes of '62 - '68 to e-mail any recollections of the series and any comments they may have on the impact the series might have had on influencing them to attend the Naval Academy.  Bud was  impressed with the response.
Comments included:  "Men of Annapolis planted the seed...",  "...first introduction to the fact that such a school existed", "...absolutely and unequivocally the reason I went to USNA".  Many similar comments were submitted.  A retired flag officer e-mailed:  "The 'Men of Annapolis' had a profound effect on me....I came home from the fields one evening, saw this wonderful place somewhere far away on the East Coast where the guys wore white uniforms and carried swords, and I said, 'that's for me!' "
The distribution of the first 91 responses:  '62 - 3, '63 - 5, '64 - 25, '65 - 4, '66 -10, '67 - 43, '68 - 0, '69 - 1.   Almost universally, the responses credit "Men of Annapolis" with being a positive influence on the alumni's knowledge of and interest in attending USNA.  The project resulted in an article for the November "Shipmate".    Contact Bud at Budalxandr@aol.com.


Here are the Flag numbers on our Class as crunched by Dick Augur:

5 COMPANIES PRODUCED ONE FLAG OFFICER EACH

Carl Doughtie was the first United States Naval officer, the first USNA graduated aviator, and the first member of our class to die in the Vietnam War:  10 June 1965.

The youngest child:  Millie and Jeff Niss's daughter, Kyla Louise Niss, born November 13, 1994.
Based upon circumstantial evidence, it is estimated that the oldest child was born during our second class year.

In terms of average class rank, the top company was 7th, the anchor was 23rd.
(Note:  23rd produced 2 Admirals). 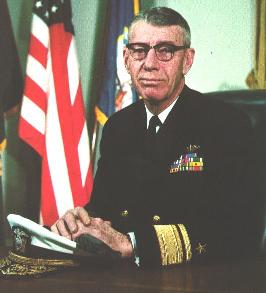 Our Supe, Uncle Charlie, did wartime patrols as CO of an SS.   He is mentioned in Gene Fluckey's book "Thunder Below."  In his Lucky Bag portrait [page 13, reproduced at left] there appears to be enough metal on the Navy Cross ribbon to suggest three awards.  Maybe the Army DSC was awarded by the Army for something he did for them and maybe a Navy Cross too.  Anyone know for sure?

On November 28, 2013 Jim ring noticed the above and volunteered this information:

I saw on our Web site that there was a question about the Army DSC that Uncle Charlie had in addition to the Navy Cross for his wartime submarine activity. I have recently been reading a lot of books about submarine activities in WWII and apparently in the early part of the war, the skippers of the submarines operating out of Australia were being awarded DSC's by Mc Arthur for their patrols. In some cases they were also being awarded Navy Crosses for the same patrol. Nimitz put an end to that.

Nostalgia Pier
By the time we graduated:
*  Marilyn Monroe was already dead (at age 36)

rasputniks:  Our white shirts used a stud in the back and another in the front to moor the collar.  Shirts and collars were laundered separately and heavily starched collars were returned with rasputniks (wooden studs) in the button holes closing the front.  As a plebe, did you ever wager any rasputniks with an upperclass?
1/c weapons exam:  Most of the stresses in our life have paled compared to our 1/C Weapons Exam.   Chuck Adams reminds us,

In the first semester of our first class year (1962-1963), our entire class endured a course entitled Anti-Submarine Warfare and Detection Systems.  It was the first time the Weapons Department had offered the course.  The syllabus included a heavy dose of material on underwater acoustics.  We all learned about snapping shrimp.  As the course progressed through the semester, it apparently became a worry to the Weapons Department faculty that their students were just "not getting it." and if they didn't do something, the failure rate for the course would be quite high.  The "something" was to make the final examination "open book."

The day of the examination, those of us in the Thirteenth Company arrived at our examination rooms with one book in our stack of references that our other classmates did not have - Thermodynamic Properties of Steam. At a prearranged time during examination, we all took out our copies of Thermodynamic Properties of Steam, removed and unfolded our Mollier diagrams and pretended to obtain a bit of information from the diagrams.  The Mollier diagram, of course, had little or nothing to do with underwater acoustics nor anything else in the course or the examination.  I took the examination in the large classroom on the top deck of Luce Hall.  There were about six other of my company mates scattered about the room.  As we consulted our diagrams, the look of pure panic on the faces of our other classmates was unforgettable!


overload courses:  We were the first class to complete four years of Overload Courses.    John Morgan obtained from the USNA Archivist:

Suggestions for the ex-submariner that misses "the good old days on the boat":